Multiple sclerosis (MS) is a disease which progressively injures the nerves of the brain and spinal cord. People without MS have nerve cells that are covered by an intact protective layer known as the myelin sheath.

Nerve cells are made up of neurons that have a head called the nucleus and a long strand that is called the axon, which is covered in the myelin sheath. This covering helps to speed electrical signals in the brain. In people with MS, for an unexplained reason, the T-cells (which make up your white blood cells) recognizes the myelin in the brain and spine as a threat to the body and attacks it. This is known as demyelinization. When the myelin sheath thins and breaks down, the, electrical signals can’t travel between the neurons. 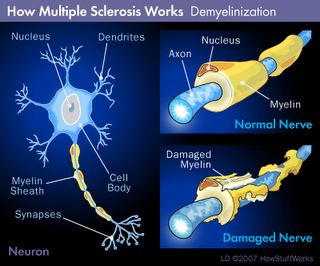 Although the myelin can rebuild itself, the rate of demyelinization caused by MS is too rapid for it to keep up. The damaged parts of myelin are often called “lesions” or “plaques”.

Basically, you just need to think of a lamp: You have a light bulb that
receives it’s signal from a wire. The wire is wrapped with plastic to protect it. If you start losing parts of the plastic the wire will start to rust and eventually the light won’t be able to turn on.

This demyelinization can cause a wide range of symptoms such as:
– muscle stiffness or spasms
– cognitive problems (e.g., memory loss)
– dizziness and sensations of spinning
– mental health problems (e.g., depression)
– extreme tiredness
– difficulty walking
– headache
– paralysis
– bladder problems
– bowel problems
– hearing loss
– itching
– numbness and tingling
– pain
– seizures
– speech and swallowing problems
– shaking
– vision problems
MS has its most striking effect on motor and sensory neurons, which generally have long axons carrying information between the brain, spinal cord, and the rest of the body. Because these axons are longer, they have a greater need for the insulation myelin provides and are therefore most affected by its destruction.

What causes MS?
Nobody knows for sure what causes MS, but most scientists agree that it involves a combination of environmental and genetic factors.
Different factors that are linked to MS include: 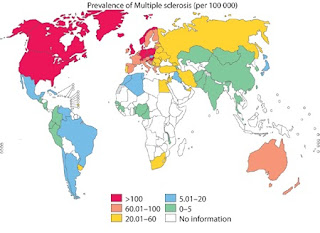 – Cold Climates/ Lack of Vitamin D: MS occurs most commonly in those living in northern climates. Apparently, where you spend the first 15 years of your life plays a role in your odds of developing MS. Canadians have one of the highest rates of multiple sclerosis in the world. (see map)
– Infection: Researchers believe that many autoimmune diseases are provoked by some kind of infection that may affect people differently who have a certain genetic makeup. The infection can trick your body’s immune system into attacking your own tissues, even after the infection has gone.
– Family history: While scientists have determined that there is no MS gene, research has shown that you are more likely to get MS if someone in your family has it.